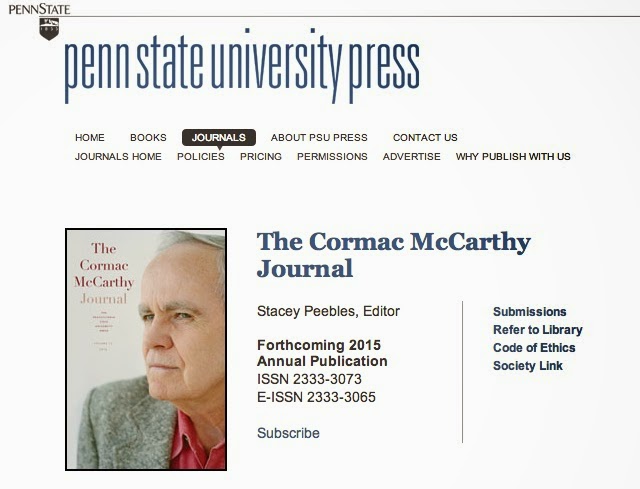 Starting in 2015, the Cormac McCarthy Journal will be published by Penn State University Press. This is great news for McCarthy scholarship. I think also this move demonstrates the high quality of the contributions already published in the journal thus far.

Stacey Peebles, editor of the journal, comments on the announcement:


I’m happy to announce that beginning in 2015, The Cormac McCarthy Journal will be published by Penn State University Press, which will be a boon for us in terms of design, prestige, visibility, production assistance, and availability in libraries and databases like JSTOR. Although our upcoming 2014 issue will be published before Penn State UP takes over our hard-copy production, we have already worked together to create a website for CMJ on their journals page. Clicking “Submissions” on that site will take you to our new online submissions website for the journal.

Although I’m still happy to field inquiries from my gmail address as I’ve done in the past, I’ll now direct submissions to the website, as well as use the site for readers’ reports as much as possible. We also have a new email address specifically for the journal. Access to previously published articles will soon be available through JSTOR (and hopefully MUSE) links on our Penn State UP website. When those links have been established, we’ll take down our old journal website, which has been hosted by the Texas Digital Library.

Members of The Cormac McCarthy Society who pay for “Membership with Journal” will continue to receive a subscription at no extra cost, and Penn State UP will handle subscriptions for non-member individuals as well as institutions.

This has all been possible because the community of McCarthy scholars has produced such great work over the years, and because there’s so much still to be done! Thanks to everyone who has supported CMJ by submitting work, commenting on others’ essays, subscribing, and reading with interest.

Hastily Articulated by Ched at 6:32 PM No comments:

Running Toward a Reckoning

The winter that Boyd turned fourteen the trees inhabiting the dry river bed were bare from early on and the sky was gray day after day and the trees were pale against it.

A cold wind had come down from the north with the earth running under bare poles toward a reckoning whose ledgers would be drawn up and dated only long after all due claims had passed, such is this history.

–Cormac McCarthy, The Crossing, 5.
Hastily Articulated by Ched at 8:06 AM No comments:

Sometime in 1987, a courtly, middle-aged gentleman approached the front desk at the Special Collections library at the University of Texas at El Paso. The man was well known by this time to those who worked at the library. He'd been coming in regularly over the past decade, doing research on Texas and Mexico and the Southwest. Some people knew that he was a writer, knew that he'd even won a MacArthur "genius" grant for his work—although few readers had heard of him and he toiled in obscurity.

At the help desk, speaking in his a soft Tennessee accent, the man asked for a slender volume kept in the reserve stacks, housed inside a red pamphlet box. The item is a reprint from an article originally published in the American Hereford Journal in 1954. Its title is, simply, "Babi'cora," and its author is the great folklorist of the Southwest, J. Frank Dobie of Texas. . . .

The researcher at UTEP in 1987, Cormac McCarthy, paid very close attention to Dobie's Babicora article. McCarthy arranged to have the story photocopied, and he made exacting pencil marks in the margins of particularly interesting passages. McCarthy went on to make substantial use of Dobie's work as he fashioned his novel in progress--a book that would be published seven years later as The Crossing.

In a recent New Yorker article, Erin Overbey talks about the criticism that J. R. R. Tolkien's work received at the hands of its initial reviewers. Overbey notes that W. H. Auden was one of the first to defend Tolkien's stories as formidable works of literature.

Auden repeatedly challenged the idea that Tolkien’s work was only suitable for children. Tolkien’s world may not be the same as our own, Auden wrote in a 1956 review of the author’s work for the New York Times, but it’s a world “of intelligible law, not mere wish,” that represents our own reality. Moreover, Auden wrote, Tolkien’s moral sensibility was profoundly grownup, especially when it came to theological questions. “The Lord of the Rings,” he wrote, aimed to reconcile “two incompatible notions” we have about God. On the one hand, we envision “a God of Love who creates free beings who can reject his love”; on the other, we picture “a God of absolute Power whom none can withstand.” It’s a story about how, as we gain power, we lose freedom. “Mr. Tolkien is not as great a writer as Milton,” Auden conceded, “but in this matter he has succeeded where Milton failed.”

Overbey ends by summarizing Auden's perspective and also describing one of the central literary elements of Tolkien's stories:

In his reviews, Auden argued that Tolkien’s work wasn’t just rambling juvenilia; it was part of a literary tradition of reinterpreting ancient archetypes to create a modern mythology. Yet the rambling nature of Tolkien’s universe is part of what drew those nerdy Brooklyn students to his work. We love to think about the dorky minutiae: how Hobbits invented the art of smoking pipe-weed, why trolls speak with Cockney accents, whether Middle-Earth is spherical. These elements aren’t distractions; they’re the magical details that elevate Tolkien’s books. People may come to Tolkien for the Milton-esque struggle between good and evil, but they stay for the fresh mushrooms and the Elvish.

See also,
Hastily Articulated by Ched at 1:15 PM No comments:

The Caravan of Carnival Folk That Begins Child of God

From the opening scene of the novel, which is the setting for the origin of Lester Ballard's eminent descent into degeneracy:


They came like a caravan of carnival folk up through the swales of broomstraw and across the hill in the morning sun, the truck rocking and pitching in the ruts and the musicians on chairs in the truck bed teetering and tuning their instruments, the fat man with guitar grinned and gesturing to the others in a car behind and bending to give a note to the fiddler who turned a fiddlepeg and listened with a wrinkled face.

–Cormac McCarthy, Child of God, 3.
Hastily Articulated by Ched at 10:21 AM No comments:


This story seems derived from the world of folklore or dream, peopled as it often is by mysterious denizens and ruled by some nightmare logic which makes one question at what level of reality the story operates.

Hastily Articulated by Ched at 7:15 AM No comments:

Stone Figures Quarried from the Architecture of an Older Time

It was late afternoon when they set forth again, out from the town, the wheels rasping in the sand, back down the yellow road. Night fell upon them dark and starblown and the wagon grew swollen near mute with dew.
On their chairs in such black immobility these travelers could have been stone figures quarried from the architecture of an older time.

Hi, I am Vince 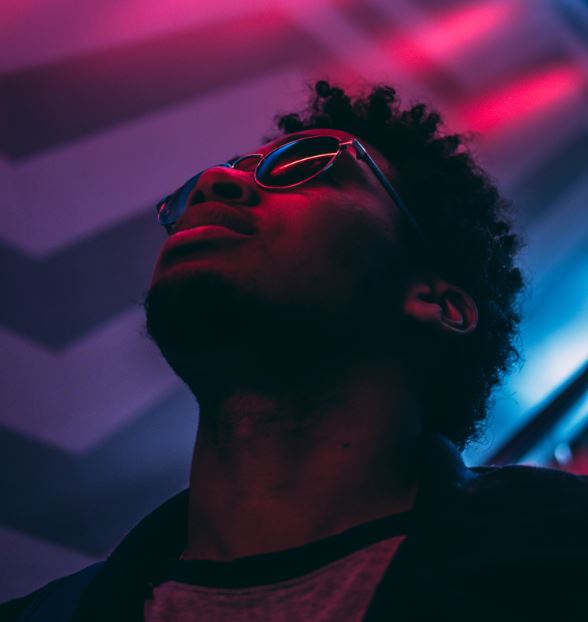 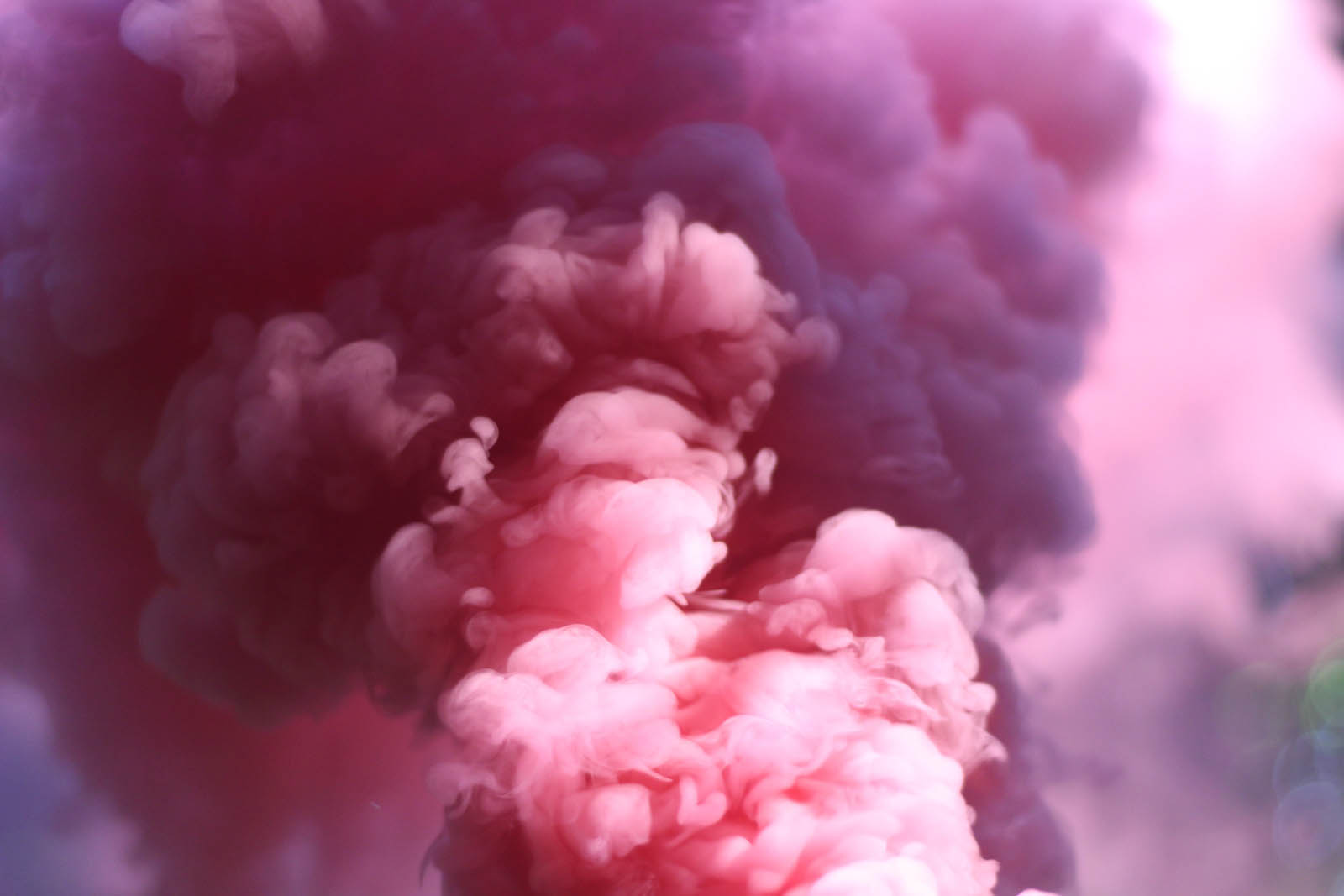 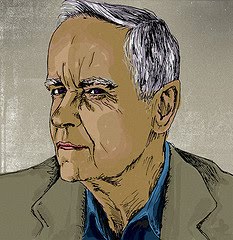 Welcome to the collocation of sporadic annotations that I'm making as I read, re-read, and read about works by Cormac McCarthy.
Inter Alia!